The European Arrest Warrant (EAW), valid throughout all member states of the European Union (EU), is used to arrest and extradite a fugitive to the issuing state so that they can face criminal prosecution.

How do EAWs work?

A country receiving an EAW may execute the warrant, even if the offence to which it relates does not constitute a criminal offence in its jurisdiction. This principle applies to a wide range of offences including corruption, computer-related crime, fraud, money laundering and drug trafficking.

Prior to the Framework Decision, various EU member states such as Austria, France and Germany had domestic rules which prevented the extradition of their nationals. Member states generally can no longer refuse to surrender their nationals under the EAW Framework, however grounds for refusal may exist in certain circumstances.

The EAW Framework Decision sets out various circumstances in which the executive judicial authority must or may refuse to surrender a person subject to an arrest warrant.

Under the Framework Decision the executing judicial authority must refuse to surrender the requested person if:

Whilst there are no explicitly stated mandatory grounds for refusal if the surrender would infringe a person’s human rights, recitals (12) and (13) of the preamble and Article 1(3) do refer to human rights. For example, recital (13) states that:

No person should be removed, expelled or extradited to a State where there is a serious risk that he or she would be subjected to the death penalty, torture or other inhuman or degrading treatment or punishment.

Under the Framework Decision the executing judicial authority may refuse to surrender the requested person if:

A European Arrest Warrant may only be issued by the competent judicial authority in an EU member state or a state with a special agreement with the EU. ‘Judicial authority’ typically refers to a court or a judge, however many member states have designated public prosecutors as their judicial authorities for the purposes of the framework decision, which has been a source of contention.

EAWs do not need to be transmitted to any particular state. When a person the subject of an EAW is found within the jurisdiction of a member state and arrested, that member state is required by the Framework Decision to execute the warrant.

The EAW Framework Decision requires that a warrant can only be issued when an offence is punishable by imprisonment or a detention order for a maximum period of at least one year, or in conviction cases, where the remaining term of imprisonment is four months or more. Controversially, this can include a wide range of trivial offences, and EAWs have been issued for offences such as low level drink driving and drug possession.

Once arrested, the subject of the EAW has the right to be informed of the warrant and its contents, their right to surrender as well as their right to the assistance of legal counsel and an interpreter.

How often are EAWs issued and executed?

The European Parliament provides some insight into the number of EAWs issued between 2005-2013, highlighting the difference between the number of warrants issued and those successfully executed, as well as the trends over time. 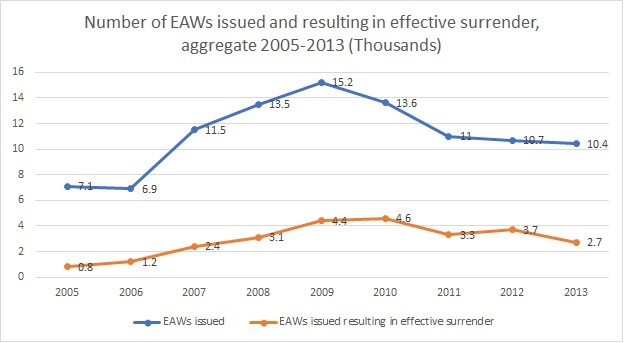 This data highlights a number of key trends:

Nyman Gibson Miralis is experienced in providing expert advice and representation in cases involving international arrest warrants, and the extradition to and from multiple European countries.